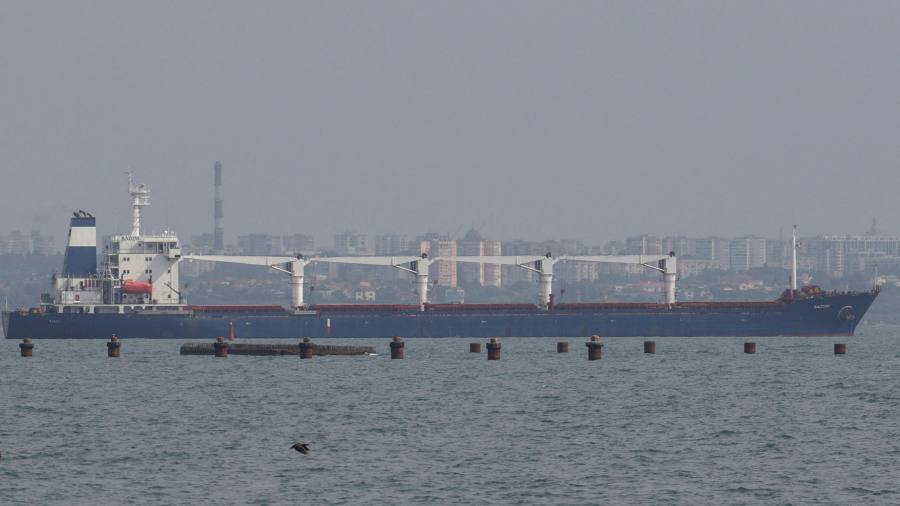 A grain shipment has left the port of Odesa for the first time in months, in a crucial test of a deal between Russia and Ukraine intended to alleviate soaring global food prices.

The Sierra Leone-flagged Razoni, carrying 26,000 tonnes of Ukrainian corn, left the Black Sea Port at 9:48am local time, the ministry of infrastructure said, after weeks of negotiations brokered by Turkey and the UN. Turkey’s defence ministry, which led the negotiations that produced last month’s grain deal, said the Razoni would take its cargo to the port of Tripoli in Lebanon.

It is the first such vessel to depart from Odesa since late February, when Russia invaded Ukraine. The Russian navy blockaded Ukraine’s commercial sea routes, launched missile strikes on its ports and grain storage infrastructure, and attacked civilian grain transport ships.

The vessel was due to arrive in Istanbul on Tuesday, according to a statement by the Joint Co-ordination Centre established as part of the UN-led grain agreement.

After reaching Turkey’s biggest city, it was expected to undergo checks at the centre, which is staffed by Russian, Ukrainian, Turkish and UN officials as part of the so-called Black Sea Grain Initiative.

Ukraine’s foreign minister Dmytro Kuleba hailed it as a “day of relief,” for large importers of Ukrainian grain, especially in the Middle East and Asia, and the US embassy in Kyiv said it was watching for “continued implementation” of the agreement.

The Kremlin said on Monday the ship’s departure was “extremely positive” news. Dmitry Peskov, president Vladimir Putin’s spokesman, said the resumption of commercial maritime traffic in the Black Sea was “a good chance to test the effectiveness of how the mechanisms work” under an agreement struck in Istanbul to allow Ukraine to export grain.

“We will hope that all the agreements will be fulfilled from all sides and the mechanism will work effectively,” Peskov said, according to the news agency Interfax.

Another 16 ships are awaiting departure, the Ukrainian government said, carrying a tiny fraction of the more than 22mn tonnes of wheat, corn and other grains that remain in the country. The conflict has left as many as 47mn people globally at risk of acute hunger, according to the World Food Programme.

All 16 of the remaining ships were trapped in Odesa and nearby ports after Russia’s invasion in late February. Ukraine said it was starting to accept applications from new vessels to pick up grain, and hoped to reach full capacity within weeks.

But owners of vessels entering Odesa are still working out the logistics of insuring their ships, cargo and personnel, which was complicated by Russian missile strikes on the port late last month, which wounded several people.

Private international operators are in a “wait and watch” mode, said a person familiar with the issue, with many vessels having long ago been reassigned to different routes.

Russia claimed to have hit military infrastructure and sunk a Ukrainian navy vessel, while Ukraine said the attack, a day after the agreement was signed, would imperil or delay the implementation of the exports accord.

Long known as the breadbasket of Europe, Ukraine is the world’s fifth-largest exporter of the cereal. It accounts for 80 per cent of Lebanon’s wheat imports and is a big supplier for countries including Somalia, Syria and Libya.