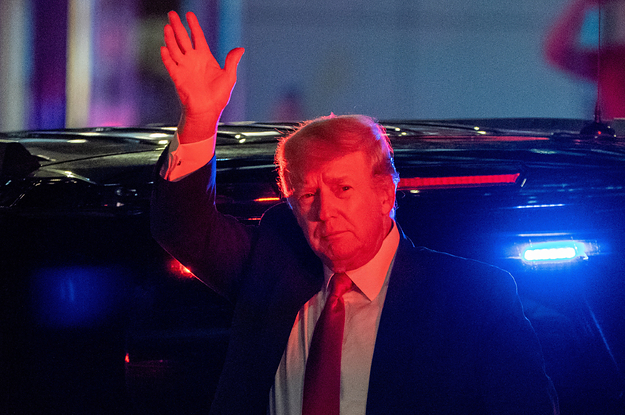 On June 8 of this year, DOJ lawyers wrote to Trump’s lawyers to once again reiterate that Mar-a-Lago was not an authorized storage location for such classified information as the documents that had been removed from the White House.

“They have not been handled in an appropriate manner or stored in an appropriate location,” they wrote. “Accordingly, we ask that the room at Mar-a-Lago where the documents had been stored be secured and that all of the boxes that were moved from the White House to Mar-a-Lago (along with any other items in that room) be preserved in that room in their current condition until further notice.”

Trump’s lawyers confirmed receipt of that request the next day.

The FBI said in the affidavit that they believed the documents could be located in a storage room at Mar-a-Lago, as well as Trump’s residential suite, his office, the Pine Hall antechamber, and “other spaces.”

“Based on the foregoing facts and circumstances, I submit that probable cause exists to believe that evidence, contraband, fruits of crime, or other items illegally possessed… will be found at the premises,” wrote the FBI special agent, whose name was redacted.

Two documents unsealed earlier this month — a search warrant and an FBI property receipt — revealed that the former president is being investigated by the Department of Justice for potential violations of the Espionage Act, mishandling government documents, and obstruction of justice.

Per the unsealed FBI receipt that detailed the items taken from the Trump estate during their subsequent Aug. 8 search, FBI agents removed 11 sets of classified documents, including some marked with the highest level of government classification. Other items seized included photos, the executive clemency grant to Trump ally Roger Stone, and a document with information on French President Emmanuel Macron.

In other documents unsealed on Friday related to the motion to release the FBI affidavit, the DOJ asked for that document to be redacted in order to “protect the safety of multiple civilian witnesses whose information was included throughout the affidavit and contributed to the finding of probable cause, as well as the integrity of the ongoing investigation.”

The DOJ warned that witnesses could be “subjected to harms including retaliation, intimidation, or harassment, and even threats to their physical safety,” noted that FBI agents who had already been identified in the proceedings had received violent threats, and said, “The government has well-founded concerns that steps may be taken to frustrate or otherwise interfere with this investigation if facts in the affidavit were prematurely involved.”

Seeking to animate his supporters as he teases another White House run, Trump has sought to cast the Mar-a-Lago search as an “unnecessary, unwarranted, and unAmerican Break-In,” per words he used in a statement this week.

“This Mar-a-Lago Break-In, Search, and Seizure was illegal and unconstitutional,” Trump added, “and we are taking all actions necessary to get the documents back, which we would have given to them without the necessity of the despicable raid of my home, so that I can give them to the National Archives until they are required for the future Donald J. Trump Presidential Library and Museum.”

Despite Trump’s blustering claims, the FBI search was not illegal or unconstitutional, as investigators had successfully sought legal permission from the federal judge to search the property.

In a statement Trump released on Truth Social, the social media platform he started after being booted from others over the Capitol insurrection, Trump complained the affidavit was heavily redacted and described it as a “total public relations subterfuge by the FBI & DOJ.”

Sen. Mark R. Warner, the Virginia Democrat who serves as chair of the Senate Intelligence Committee, said in a statement, “It appears, based on the affidavit unsealed this morning, that among the improperly handled documents at Mar-a-Lago were some of our most sensitive intelligence – which is one reason the Senate Intelligence Committee has requested, on a bipartisan basis, a damage assessment of any national security threat posed by the mishandling of this information.

“The Department of Justice investigation must be allowed to proceed without interference,” Warner said.

Asked by reporters at the White House on Friday whether he believed national security was threatened by Trump keeping the documents at Mar-a-Lago, President Joe Biden responded, “We’ll let the Justice Department determine that.”