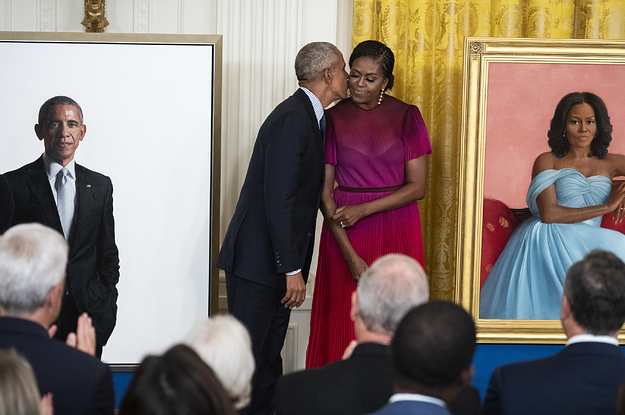 Barack Obama thanked Sharon Sprung, the artist who painted Michelle in a blue dress as she’s seated on a sofa in the Red Room, for capturing everything he loves about his wife, including her “grace, her intelligence, and the fact that she’s fine.”

Sprung was also shown appreciation for holding on to the portrait for so long. In addition to Trump’s break with tradition, the pandemic prevented a make-up ceremony shortly after Biden took office, keeping the portraits under wraps until now.

Barack Obama then thanked Robert McCurdy for his photorealistic portrait, saying he wanted the unvarnished truth to come through.

“You’ll note that he refused to hide any of my gray hairs, refused my request to make my ears smaller,” he told the crowd.

Both portraits were painted based on photographs taken by the artists, who explained their processes and points of view in a video posted on YouTube.

Michelle Obama also reflected on what it means to have her portrait hanging in the White House for decades to come.

“I do recognize why moments like these are important, why all of this is absolutely necessary,” the former first lady said. “Traditions like this matter, not just for those of us who hold these positions, but for everyone participating in and watching our democracy.