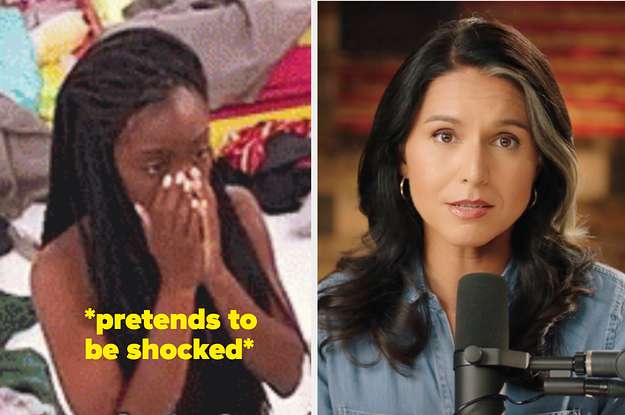 In news that will be deeply distressing to her supporter, Tulsi Gabbard, the former lawmaker from Hawaii whose total flameout in the 2020 presidential primary led her to look for any shreds of political relevance she could find in right-wing culture wars, announced she was leaving the Democratic Party on Tuesday.

In a video posted to Twitter in which she parroted right-wing talking points on crime, wokeness, and “anti-white racism,” Gabbard said she was leaving the Democratic Party and instead hosting a new self-titled YouTube show.

“If you can no longer stomach the direction that so-called woke Democratic Party ideologues are taking our country, I invite you to join me,” Gabbard said.

For good measure, her message also included what appeared to be veiled antisemitism and QAnon references in which she said the party was “under the complete control of an elitist cabal of warmongers” that “weaponize the national security state to go after political opponents.”

Gabbard also sounded positively Trumpian in the first 28-minute episode of her show, accusing Democrats of rejecting the rule of law and turning the country into a “banana republic” — seemingly ignoring all the evidence that Trump and his Republican allies have consistently sought to undermine that bedrock principle of democracy. (In 2019, she was the only member of Congress to stay neutral by voting “present” at Trump’s first impeachment.)

The reality is that Gabbard, who represented Hawaii’s 2nd Congressional District from 2013 to 2021, had long since drifted to the right on a variety of issues.

In 2020, she decided to use the final days of her time as a lawmaker openly signaling the beginnings of her right-wing shift, trying to restrict abortion and attacking transgender women and girls.

Since leaving office, she has slammed President Joe Biden for calling out Republican attacks on voting and has railed against his former signature domestic policy law known as “Build Back Better” as furthering a “cradle-to-grave mentality of government dependence.”

She has also compared so-called cancel culture to ISIS terrorism and has encouraged Florida Gov. Ron DeSantis to go even further with his “Don’t Say Gay” law. (While courting Democratic voters in 2019, Gabbard apologized for her past conservative views on LGBTQ issues, including on marriage equality, but I guess that’s old news now.)

This year, she was also a speaker at the Conservative Political Action Conference in Florida, where she told the crowd she felt “right at home.”

In January, the left-leaning British magazine New Statesman even called her “a dark-horse contender for the 2024 GOP nomination.”

At the end of an interview last November on Fox News, far-right Trump acolyte Sean Hannity seemed already satisfied with Gabbard’s political transition to the right.

“You don’t sound like a Democrat to me,” he told her. “I hereby — raise your right hand — you’re definitely a conservative.”