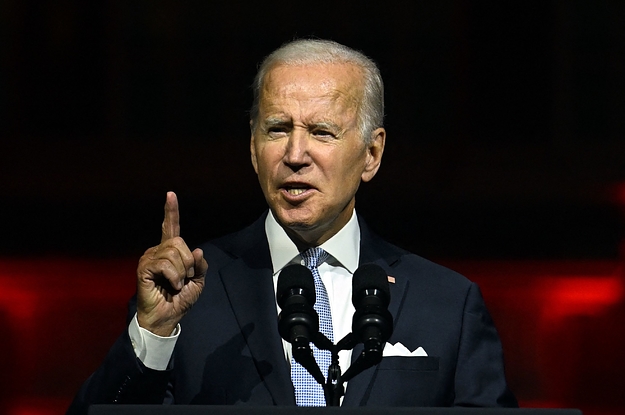 In the wake of a violent attempted coup propelled by disinformation from a candidate who handily lost an election but refused to concede and who is now preparing to run again on a pledge to pardon his insurrectionist followers, President Joe Biden is facing criticism for his Thursday night speech warning about the dangerous threats currently facing US democracy.

Speaking at Independence Hall in Philadelphia, roughly 140 miles from where thousands of people stormed the US Capitol in an effort to violently halt the certification of a legitimate election and assassinate political rivals, Biden warned that “equality and democracy are under assault.”

“Donald Trump and the MAGA Republicans represent an extremism that threatens the very foundations of our republic,” said the president, referring to his onetime rival who falsely claimed to have won an election and then called on supporters, some of whom he knew were armed, to march to the Capitol and “fight like hell.”

Following his speech on the increasingly authoritarian threats facing the United States, Biden was accused by some DC reporters of intentionally seeking to frame the upcoming midterm elections not around inflation, but instead as a choice between one party that has demonstrated respect for the democratic system of government and another that has nominated candidates who don’t respect election outcomes to oversee future voting contests.

The president — who spoke at length about the surge in death threats made to elections officials and to law enforcement agents attempting to investigate the innumerable alleged criminal actions of a former official who seems not to believe that the rule of law applies to them — was also criticized by other DC journalists for his “wrong” behavior in delivering “a political speech” while two US Marines stood nearby.

The slight military backdrop for the speech — delivered approximately two years before American voters will choose whether to reelect a former president who was twice impeached for his conduct in office and who, if successful, is reportedly planning to purge thousands of civil servants and replace them with political loyalists in order to carry out his agenda without question — was decried by some TV reporters as being a “break with White House traditions,” despite that not actually being the case.

Amid calls by some politicians to do away with democratic systems of voting that do not automatically lead to their party winning elections, as well as a distracting moral panic manufactured by these same politicians that has led to an increase in attacks on teachers, librarians, children’s hospitals, transgender child athletes, LGTBQ adults, and people trying to stop children from killing themselves, conservative media figures also slammed Biden’s “highly partisan” speech as “divisive.”

“President Biden, instead of trying to unify America as he promised he would at his inauguration, tonight issued a call to war against half the nation,” said one member of Congress who voted, along with 146 of his party’s colleagues, to overturn the democratic will of the American people. “This partisan political rant by a sitting president in such an historical setting was a disgrace.”