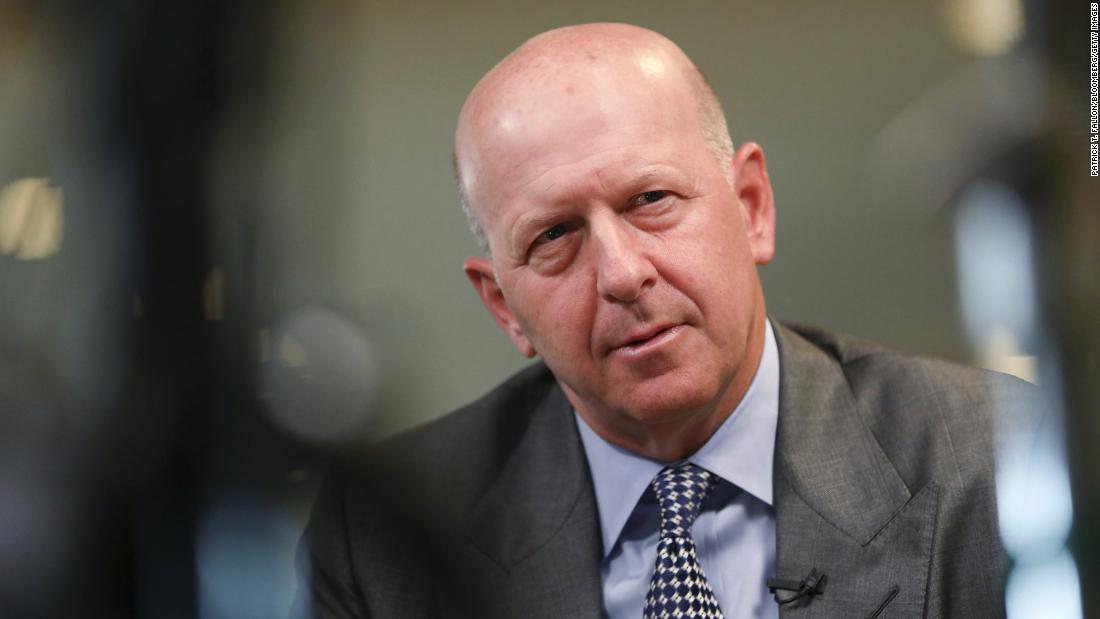 David Solomon, the part-time electronic dance DJ who previously served as president of the company and co-head of its investment banking division, took the reins from Lloyd Blankfein on Monday as CEO.
Blankfein, who had served as CEO since 2006 and will stay on as chairman through the end of the year, is already thinking about his next chapter, which could include more “unrestrained tweeting.” He started weighing in on issues including climate change and immigration toward the end of his tenure.
“I might venture forward on opinions that are my own opinions, without any regard for whether they serve the constituencies and the interests of Goldman Sachs,” Blankfein said in a sit-down with Solomon posted Monday to social media.
His successor has plenty to do.
The bank’s stock is down more than 11% this year. It has underperformed peers, weighed down by an inconsistent trading division that doesn’t mint money the way it used to. Recruitment and retention of top talent remains vital, as does the development of newer lines of business, such as Marcus, Goldman’s nascent retail banking venture.
Here’s what tops Solomon’s to-do list.

Solomon’s first order of business is to turn around Goldman’s trading desk, which collects client fees to buy and sell stocks, bonds, commodities and currencies.
“The trading business is really what has hurt them in the past couple of years,” said King Lip, chief strategist at Baker Avenue Asset Management in San Francisco.
The unit made up more than half the bank’s revenue in 2012, but shrank to just over a third last year, as a calm market and low interest rates pushed investors toward lower-fee index funds and passive funds.
Goldman’s trading side showed resilience last quarter, but not because of stocks. Revenue from bond, currency and commodities trading surged 45% from a year ago, while revenue from equities stayed stagnant.
Solomon is willing to make changes. Last month, he installed Marty Chavez, the outgoing CFO, as co-lead of the struggling division.
At a conference hosted by Sanford C. Bernstein in May, Solomon said that Goldman wasn’t sitting around “waiting for the environment to change,” and that the firm will keep investing in technology for trading.

Solomon is making his presence felt with other leadership changes.
Stephen Scherr, who had been in charge of the consumer bank, is stepping into the CFO role. John Waldron, a longtime deputy of Solomon’s, will take over as president and chief operating officer.
“The question is: How does his new team jell together?” said Stephen Biggar, an analyst at Argus Research.
Another challenge for Solomon will be attracting and keeping talent at the firm.
Many young professionals have favored Silicon Valley over Wall Street in recent years, as tech companies entice college graduates with competitive pay and relaxed work environments.
Goldman has loosened up, with results to show for it. Roughly two-thirds of employees are Millennials, while more than 25% are engineers.
Still, the company must ramp up diversity efforts that started under Blankfein, Lip said.
Solomon has signaled this is a priority. This summer, more women were added to the 33-person management committee. Goldman also said it had formed a committee to promote the careers of diverse business leaders at the company.

As trading becomes a less reliable source of income, and many competitors scale up, Solomon’s Goldman is expected to explore new ways to grow its business.
“The supermarket finance business model is what’s working well today, and Goldman is a lot [narrower],” Biggar said.
Some of this work is underway. Last year, Goldman released a plan to boost revenue by $5 billion by 2020, in part by bulking up other parts of the company.
And the firm has doubled down on its consumer arm, Marcus. Goldman, which launched Marcus in the United States in 2016, started to offer savings accounts in the UK last week. The bank may expand into life insurance, mortgages, auto loans and wealth management services down the road.
“We have the ambition to build a large, differentiated, highly profitable digital consumer finance platform,” Solomon said in May.
Solomon has been at the bank since 1999. He’s expected to be a leader in Blankfein’s mold, though his extracurricular interests certainly set him apart.
“This is not somebody they’re bringing in from the outside that will radically alter the makeup of the company,” Biggar said. “I don’t think anyone’s expecting that. But there are things on the edges he could do.”