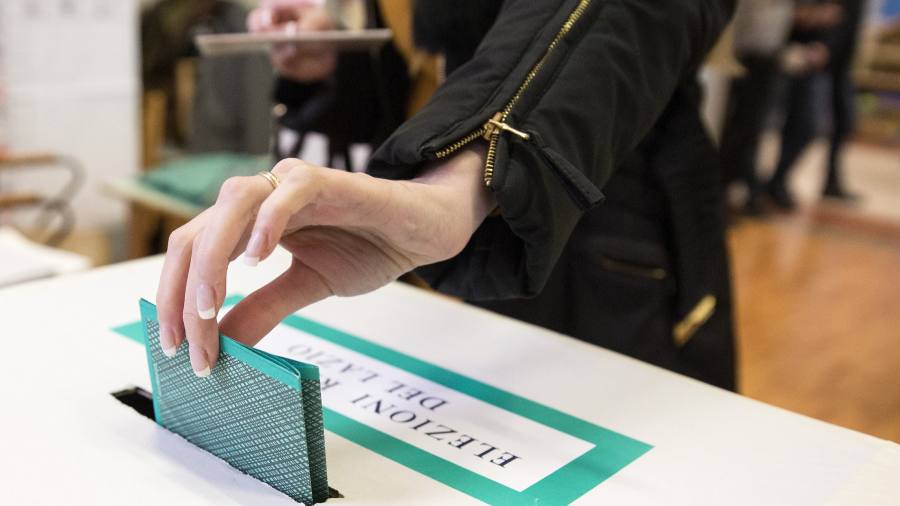 Hello and welcome to the working week.

Or should that be the voting week? The next seven days certainly has a bumper crop of elections.

On Monday we will be picking over the fallout from Italy’s lurch to the right after the completion of a bad-tempered election campaign. The Financial Times got in early with a Big Read on what a far right administration means for the rest of Europe. On Tuesday, from 1-2pm BST, you can join FT correspondents and a special guest for a subscriber-only virtual briefing on the election results. Get your pass at ft.com/italianelection and submit your questions for the panellists.

We also have elections in Latvia, Bulgaria, Kuwait, and Bosnia and Herzegovina this week. But the big one will be on Sunday with the first round of the Brazilian presidential election. The race frontrunner is leftwing former president Luiz Inácio Lula da Silva, but incumbent Jair Bolsonaro is far from out of the race. Tensions are running high.

A smaller but nonetheless significant ballot takes place on Thursday, when the alderman of the City of London will decide the next lord mayor. This largely ceremonial role will be key to promoting the UK’s financial centre, so it’s important. Hopefully the ballot will not prove as contentious as last year’s.

Aside from elections, it is a strong week for space travel. On Monday, Nasa will be crashing a spacecraft into an asteroid at 23,000kph in order to divert its path. The $300mn Dart mission, short for Double Asteroid Redirection Test, has picked as its target an asteroid called Dimorphos because it orbits another asteroid rather than the sun.

The US space agency will be busy again the next day with the launch of Artemis I, the first in a series of increasingly complex missions to establish a permanent human base on the moon.

If that were not uplifting enough the week will end with the return of the London Marathon, albeit six months later than its usual April slot to enable it to take place at all after the disruption the pandemic brought. In another unusual change, I will be running it (also, almost certainly for one year only) in aid of an old school adventure playground located along the route — you can read about the playground in a piece I penned on importance of play for the Weekend FT. You can give by clicking here.

Thank you for your responses to this newsletter. Get in touch at jonathan.moules@ft.com or hit reply to the email.

Continuing the theme of play, Lego (the name is derived from the Danish phrase leg godt, or play well) reports half-yearly results on Wednesday. The toymaker has guided analysts to expect a normalising of sales after its pandemic boom but expectations are high that sales will continue to outpace rivals in the sector.

For petrol heads, Thursday is an exciting day because shares in Porsche will begin trading on the Frankfurt stock exchange after the long-awaited flotation of the luxury car brand.

It’s a more sombre week for lovers of the silver screen. Ailing movie house chain Cineworld will report its half-year results on Friday. Although the group is expected to post a profit, contrasting with last year’s loss, focus will turn to its latest cash position and net debt level after the company filed for bankruptcy protection in the US earlier this month.

This will be a week of finding out how economies are performing and how the public expect them to perform with gross domestic product figures from the US, Canada and the UK as well as several consumer confidence surveys.

We will also get further insights into the battle in Europe to calm inflation with the release of consumer price index and producer price index readings from Germany, France and Italy.

Here is a more complete list of what to expect in terms of company reports and economic data this week.

Finally, here is a rundown of other events and milestones this week.