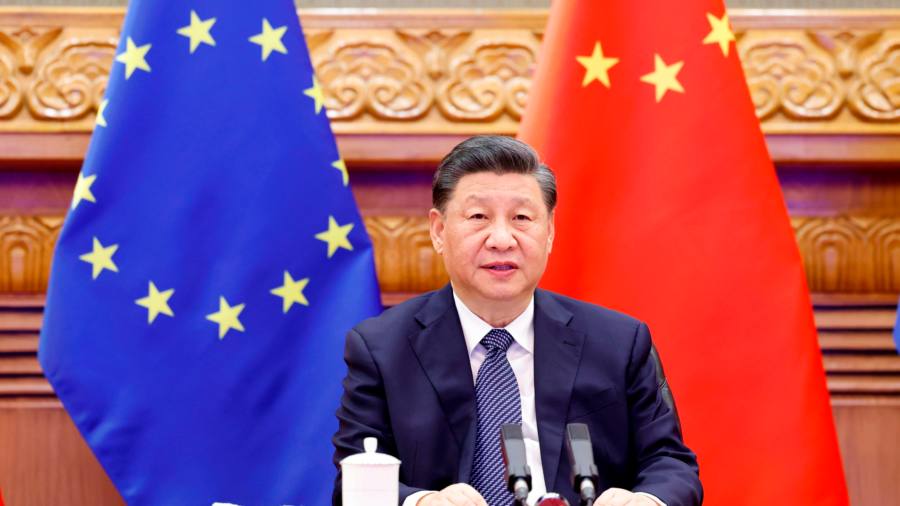 The EU must toughen up its attitude towards China and see the country as an all-out competitor with limited areas of potential engagement, the bloc’s ministers have been advised ahead of talks on recalibrating Brussels’ strategy towards Beijing.

The EU should work more closely with the US, strengthen its cyber and hybrid threat defences, diversify its supply chains away from China and deepen ties with other Indo-Pacific powers, according to a paper prepared for member states by the bloc’s foreign service.

“China has become an even stronger global competitor for the EU, the US and other like-minded partners,” says the paper, seen by the Financial Times. “It is therefore essential to assess how best to respond to current and foreseeable challenges.” These, the paper says, are likely to “widen the divergence between China’s and our own political choices and positions”.

The assessment “admits that China is not going to change”, said a senior EU official. “In short, moving to a logic of all-out competition, economically but also politically.”

The paper underscores the significant souring of the EU-China relationship since the existing policy towards Beijing was agreed in 2019, a decline marked by trade disputes, tit-for-tat sanctions and a series of failed efforts to find areas of mutual agreement.

China’s backing for Russia in its invasion of Ukraine, its threats towards Taiwan, its attitude towards human rights in Hong Kong and its treatment of its Uyghur minority are all major developments since the EU formed its existing policy, officials said, warranting a rethink.

“This is the moment to assess . . . And see if our policy is the right one,” said a second senior EU official. “We have to factor in the serious events that have happened over the past year.”

On Sunday, Chinese president Xi Jinping used his speech to the Communist party congress — where he will cement his position as the country’s most powerful ruler since Mao Zedong — to rail against “foreign interference” and “protectionism and bullying” by other countries.

The EU document suggests that the bloc’s existing policy of seeing China as “partner-competitor-systemic rival” is outdated. The paper will be discussed by foreign ministers at a meeting in Luxembourg on Monday to prepare for a debate on China by the bloc’s 27 leaders at a summit that begins on Thursday.

Arriving at the meeting on Monday, Dutch foreign minister Wopke Hoekstra said: “There is increasing realism in the dialogue with China. We are leaving naivety behind.”

Josep Borrell, the bloc’s chief diplomat, said: “A new discussion on China, with a new analysis, is very timely.”

The EU’s discussions this week come after the US warned that China was its “most consequential geopolitical challenge”, releasing a national security strategy that warned Beijing “harbours the intention and, increasingly, the capacity to reshape the international order”.

“We will prioritise maintaining an enduring competitive edge over the PRC,” the US strategy said.

For the EU, China’s deepening ties with Russia, particularly since the invasion of Ukraine, are “a worrying development . . .[that] cannot be ignored”, the ministerial paper says, adding that Beijing’s support for Moscow has “brought China to more directly contest western democracies”.

The five-page document includes just one paragraph on areas of limited potential co-operation with China — including climate change, the environment and health — in stark contrast to the existing policy that describes Beijing as “a strategic partner of the EU in addressing global and international challenges”.

The EU’s dependence on China for semiconductors and certain rare-earth metals is addressed as a “strategic vulnerability” by the paper, which calls for more domestic production, diversified supply chains and other initiatives such as better recycling inside the bloc.

The EU should also recognise that China’s “activities and positions in multilateral organisations exemplify its determination to systematically promote an alternative vision of the world order, where individual human rights are subordinated to national sovereignty, and economic and social development takes prominence over political and civil rights”, the discussion paper says.

“The EU and member states have also experienced increased instances of economic coercion by China, harsher competition in key technologies, cyber and hybrid threats and information manipulation, as well more assertive policies in the Indo-Pacific,” it continues, calling on the EU to promote a “better offer” to third countries that are engaging with Beijing.