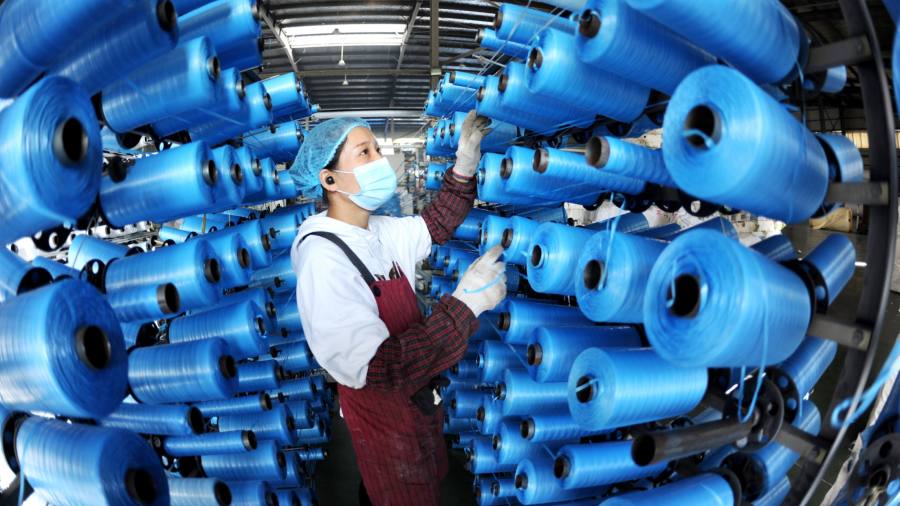 The writer is chair of Rockefeller International

As he embarks on a third term, Xi Jinping’s goal is to make China a mid-level developed country in the next decade, which implies that the economy will need to expand at a rate of around 5 per cent. But underlying trends — bad demographics, heavy debt and declining productivity growth — suggest the country’s overall growth potential is about half that rate.

The implications of China growing at 2.5 per cent have yet to be fully digested anywhere, including Beijing. For one thing, assuming that the US grows at 1.5 per cent, with similar rates of inflation and a stable exchange rate, China would not overtake America as the world’s largest economy until 2060, if ever.

Growth in the long term depends on more workers using more capital, and using it more efficiently (productivity). China, with a shrinking population and declining productivity growth, has been growing by injecting more capital into the economy at an unsustainable rate.

China is now a middle-income country, a stage when many economies naturally start to slow given the higher base. Its per capita income is currently $12,500, one-fifth that of the US. There are 38 advanced economies today, and all of them grew past the $12,500 income level in the decades after the second world war — most quite gradually. Only 19 grew at 2.5 per cent or faster for the next 10 years, and did so with a boost from more workers; on average the working age population grew at 1.2 per cent a year. Only two (Lithuania and Latvia) had a shrinking workforce.

China is an outlier. It would be the first large middle-income country to sustain 2.5 per cent gross domestic product growth despite working-age population decline, which began in 2015. And in China this decline is precipitous, on track to contract at an annual rate of nearly 0.5 per cent in the coming decades. Then there’s the debt. In the 19 countries that sustained 2.5 per cent growth after reaching China’s current income level, debt (including government, households and businesses) averaged 170 per cent of GDP. None had debts nearly as high as China’s.

Before the 2008 crisis, China’s debts held steady at about 150 per cent of GDP; afterwards it began pumping out credit to boost growth, and debts spiked to 220 per cent of GDP by 2015. Debt binges normally lead to a sharp slowdown, and China’s economy did decelerate in the 2010s, but only from 10 per cent to 6 per cent — less dramatically than past patterns would predict.

China avoided a deeper slowdown thanks to a tech sector boom and, more importantly, by issuing more debt. Total debt is up to 275 per cent of GDP, and much of it funded investment in the property bubble, where all too much of it went to waste.

Though capital — largely property investment — helped pump up GDP growth, productivity growth fell by half to 0.7 per cent last decade. The efficiency of capital collapsed. China now has to invest $8 to generate $1 of GDP growth, twice the level a decade ago, and the worst of any major economy.

In this situation, 2.5 per cent growth will be an achievement. Sustaining basic productivity growth of 0.7 per cent will barely offset population decline. To hit 5 per cent GDP growth, China would need capital growth rates near those of the 2010s. Most of that money went into physical infrastructure: roads, bridges and housing. Given the scale of the housing bust, it’s likely overall capital growth will fall back to about 2.5 per cent.

Of course, the consensus is that China can achieve whatever target the government sets, but consensus forecasts have fallen short of recognising the pace of China’s slowdown in recent years, including this one, when growth is likely to fall below 3 per cent. Around 2010, many prominent forecasters thought China’s economy was going to overtake the US’s in nominal terms by 2020.

By 2014, some economists were claiming that China already was the world’s largest economy in terms of purchasing power parity — a construct based on theoretical currency values with no meaning in the real world. These theoreticians argued that the yuan was grossly undervalued and bound to appreciate against the dollar, revealing the dominance of China’s economy.

Instead, the Chinese currency depreciated, and its economy is still a third smaller than the US’s in nominal terms. If anything, 2.5 per cent is an optimistic forecast that plays down the risks to growth, including growing tensions between China and its major trade partners, growing government interference in the most productive private sector — technology — and mounting concerns about the debt load.

China at 2.5 per cent growth has major implications for its ambitions as an economic, diplomatic and military superpower. A lesser China is more likely than the world yet realises.