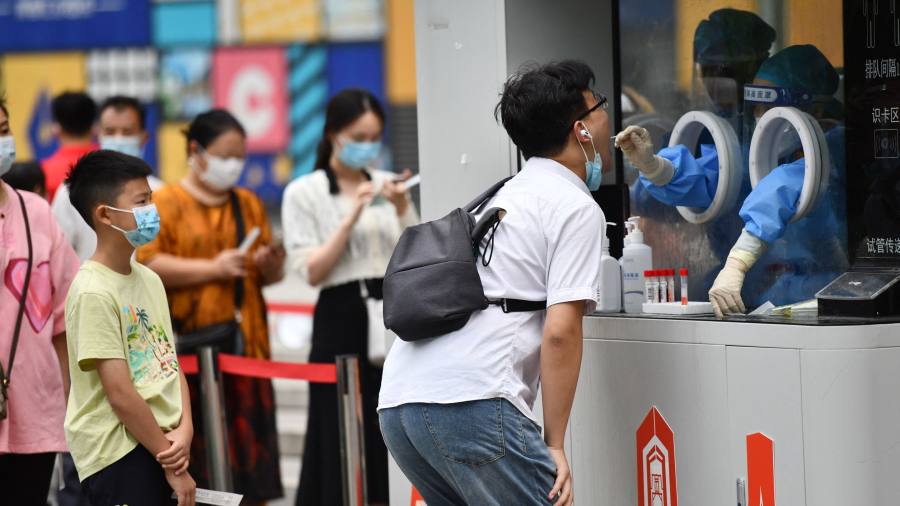 Chinese authorities have extended Covid-19 lockdowns of Chengdu and Shenzhen, backtracking on promises of freedom for tens of millions of people in the southern megacities following mass testing campaigns.

At least 68 cities are in partial or full lockdown, according to data from the country’s National Health Commission, fuelling anxieties that restrictions initially planned for days could extend into weeks or longer as occurred in Shanghai this year.

Authorities in Shenzhen, China’s manufacturing and technology hub, said on Monday that restrictions would continue for three days in parts of the city where cases had been reported after a weekend lockdown of some of its 17.5mn residents. On Sunday, the city reported 71 new coronavirus cases.

Chengdu, a city of 21mn and the capital of Sichuan province, announced a four-day lockdown last week. But authorities reported 140 cases on Sunday and said the restrictions would persist until at least Wednesday. The measures sparked panic buying across the city, with videos spreading online of people piling up their cars with pork and vegetables.

Reflecting the sweeping impact of President Xi Jinping’s zero-Covid policy, authorities have urged citizens to stay home for the upcoming Mid-Autumn Festival. The decision has dealt a blow to hundreds of millions of workers, who often make a rare trip to their hometowns for family gatherings for the annual event, which starts on Saturday.

The latest restrictions also added to pressure on the world’s second-biggest economy, which has been grappling with a liquidity crisis in the property sector. The economy expanded 0.4 per cent year on year in the three months to the end of June, below the 1.2 per cent forecast by economists.

“Uncertainty over China’s growth prospects and concerns about project incompletion will largely drive weak homebuyer demand over the next six to twelve months. Covid-19 disruptions to business activity and sales execution will also dampen consumer sentiment,” said Daniel Zhou, an analyst at Moody’s, the rating agency.

Other provincial capitals have halted transportation or movement of their citizens to get cases back to zero, aligning with the central government’s elimination strategy.

For example in Hangzhou, the capital of Zhejiang province in eastern China, testing requirements for anyone going to work, shop or take public transport have been tightened to 72 hours from once a week.

But some businesses are showing increasing signs of being able to operate under the zero-Covid policy.

In Chengdu, many factories, including German carmaker Volkswagen, have arranged for workers to live on their campuses in “closed-loop” systems in order to stay open.

The lockdown has followed a tough month for Sichuan province, which has endured a record heatwave and drought. On Monday, a 6.6 magnitude earthquake struck Luding county, south-west of Chengdu.