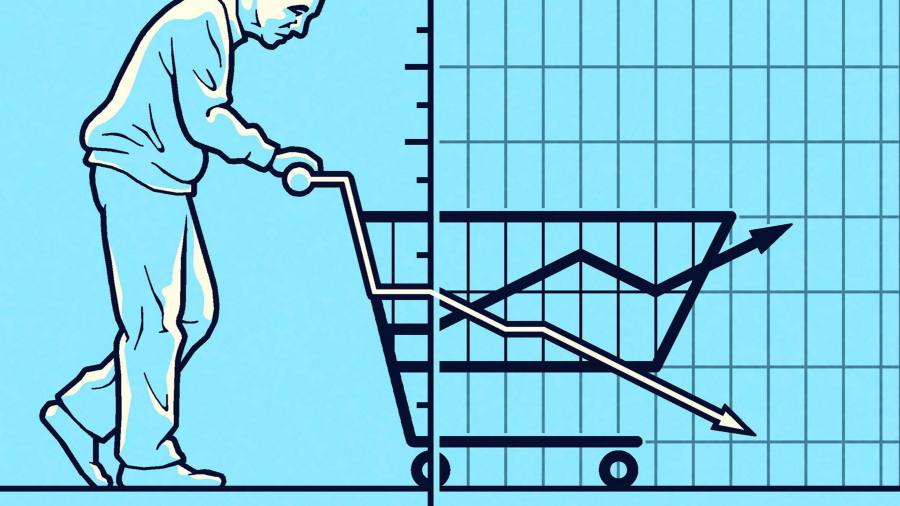 Walmart’s top executives had to laugh as they prepared to discuss their latest earnings with analysts, chief executive Doug McMillon admitted last week. The conflicting anecdotes the US retailer was about to share about consumer demand — back to school backpacks flying off the shelves even as it had to slash prices to clear excess stock and its poorest customers traded down from beef to beans — seemed like a Rorschach test of economic interpretations.

But if the company that sells more goods to more Americans than any other is struggling to interpret the consumer mood, spare a thought for those parsing such snippets for clues as to whether or not inflation is tipping the US into a recession.

Consumer confidence surveys, usually a reliable source of advance warning on which way spending is heading, could not paint a much more dire picture of the outlook as the Federal Reserve scrambles to tame rising prices. The University of Michigan’s index of consumer sentiment hit a record low in June as inflation topped 9 per cent. Even after a slight rally, it still suggests that consumers are more gloomy now than they were during the worst of the Covid-19 pandemic, the global financial crisis or any other moment since the series began in 1952. Other surveys support this trend, with McKinsey finding twice the number of economic pessimists in July as in March.

Yet this pessimism is not showing up in the sales story being told by Walmart and its rivals. For all the evidence that high petrol and grocery prices are squeezing those with the tightest budgets, or that pandemic-weary Americans now prize holidays over home goods, the retailers’ figures suggest that spending remains strikingly robust.

Given all that has been thrown at them, including rising mortgage rates, Home Depot’s customers have been “incredibly resilient”, the DIY chain remarked as it reported record sales. “Rather than seeing [them] trade down, in many cases, we are seeing the opposite,” noted Lowe’s, its rival.

Even Target, which has been plagued by inventory troubles, is still producing sales growth. The industry leaders are not alone: US retail sales rose more than expected in July, once fuel and car purchases were stripped out. Americans are getting less for their dollars, but they are still spending them.

That shopping basket-half-full message has been echoed by executives from Visa and Mastercard to General Motors and Starbucks this earnings season. “Consumer sentiment is all over the map . . . But we have so much excess demand,” observed Tesla’s Elon Musk.

Inflation, it seems, has severely affected consumers’ morale but has yet to affect their actual buying behaviour to anything like the same extent. “While consumer sentiment is now firmly in recession territory, consumers are not following through on their feelings,” Jefferies economists Aneta Markowska and Thomas Simons wrote last week.

Greg Daco, chief economist at EY-Parthenon, says that had he seen such weak confidence in the past, he would expect a 10-15 per cent drop in spending. More than ever before, he concludes, we need to watch what consumers do, not what they say.

But why should sentiment have become a less reliable guide to spending? The clearest explanation is what John Leer, chief economist of data group Morning Consult, calls an unprecedented divergence between inflation and unemployment. Even as small business optimism scrapes recession-like levels, unemployment remains near record lows.

The stimulus payments which helped employers keep staff on also allowed consumers to shore up their savings. US households have twice as much cash to hand as they did at the end of 2019, McKinsey noted.

Not all households, of course. Break down the headline figures and you find, unsurprisingly, that sentiment has fallen the furthest among the beef-to-beans income group. Older Americans, who have suffered the worst in the pandemic and know what inflation can do, are also disproportionately pessimistic.

Polls show that Republicans, whose views of the economy were far rosier than Democrats’ through the Trump era, now see a dramatically darker outlook, and vice versa. And if the country’s partisan divides are souring the mood, so are geopolitical headlines.

Consumers, Leer notes, respond faster to bad news than good. Even non-drivers quickly registered the sudden increase in petrol costs after Russia invaded Ukraine, for example, while the slow return to pre-invasion prices has not quelled their concerns.

That suggests that even if policymakers can tame inflation it may not produce the swift boost to consumers’ mood that many companies — and the Biden administration — hope for. It is also a reminder that consumer confidence had not recovered from the shock of Covid-19 before it was tested again by the steepest inflation in decades.

It is becoming clear that the back-to-back blows of the pandemic and inflation have left a lasting mark on Americans’ economic confidence. Yet low unemployment and high savings levels point to US consumers’ spending remaining more robust than the surveys capturing their anxious mood would imply. Even so, there are other reasons to worry about a less confident America.