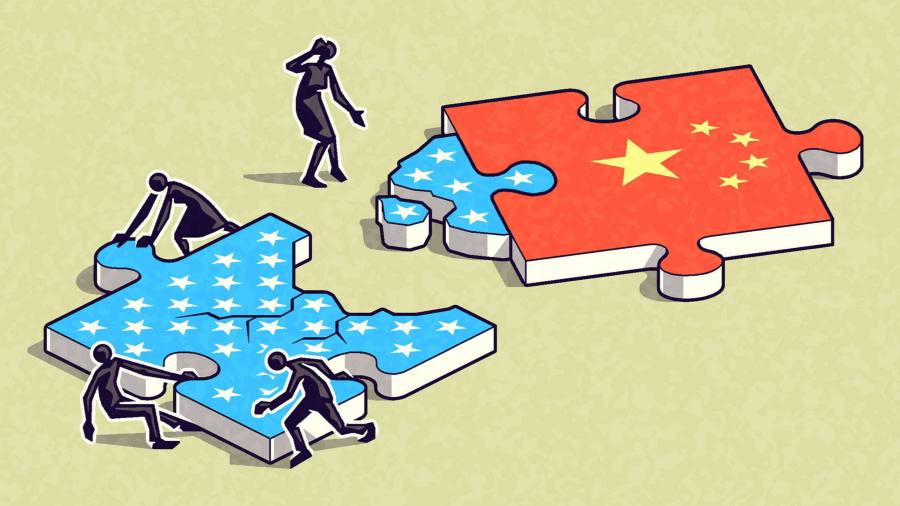 The drumbeat of decoupling between the US and China rose to a crescendo last week as President Joe Biden issued an executive order telling the Committee on Foreign Investment in the US to boost scrutiny of cross-border deals in sensitive areas such as artificial intelligence, quantum computing and biotechnology.

The order didn’t specifically mention China but was clearly part of a growing effort by the White House to separate its supply chains and financial markets from Chinese influence.

Whether or not you agree with the move, or decoupling in general, it’s high time America had a much more complete strategy for how to deal with the reality. US-China tensions have risen to worrisome levels, particularly around the issue of Taiwan.

Last week, the Senate foreign relations committee approved a bill that would provide $6.5bn in direct military assistance to the country, as part of an effort to help the island nation — which produces 92 per cent of the world’s high-end semiconductors — defend its sovereignty.

The path to actually passing the bill and pushing through aid money is unclear. But the move, along with talk of new sanctions against China to deter a potential attack on Taiwan, are pushing geopolitical hot buttons at a time when the US has yet to develop a detailed action plan for the economic fallout from such a conflict, or even the continued decoupling of the US and Chinese economies.

In Washington, fears that Beijing is planning a military invasion are growing, and America is in danger of becoming embroiled in sparring between Beijing and Taipei in the Taiwan Strait. But what would happen if supply chains and financial flows between the US and China were cut off tomorrow? What’s the day-one plan?

Nobody I’ve spoken with in either the public or private sector has a clear and complete answer to that question. The government approach has so far fallen into two categories: a tit-for-tat response to China’s own moves, involving tariffs and sanctions, or a big-picture but still somewhat vague top-down approach about how to rebuild the industrial base at home.

Donald Trump’s administration was mostly about the former. The Biden administration has made clear it wants to sharpen government focus on protecting national security and building more resilience and redundancy at home, and regionally with partners (“friend-shoring”), in strategic areas such as semiconductors, green batteries, key minerals and pharmaceuticals. That’s important, and needed. But now both policymakers and businesses need to really drill down to what that means in practice.

What would it mean, for example, if China suddenly stopped shipping key drug ingredients to the US? Is there a full list of what the most important inputs are, which companies use them, where alternative supplies could be located quickly, what percentage of consumption needs they could meet, and how quickly (and at what cost) industry in either the US or allied nations could manufacture new supply?

Likewise, how would the US (and the world) meet chip demand should China invade Taiwan? Would there be a military counterstrike? Is it conceivable that foundries on the island would be destroyed? Are there any plans for which parts of the public and private sector would be prioritised in the event of a major and immediate semiconductor supply shortage?

These are terribly uncomfortable questions, and it’s no surprise that few want to raise them. But they are exactly the ones we need to be asking, particularly given that Chinese leader Xi Jinping — who is likely to be reappointed for a third term at the Communist party congress in mid-October — has made clear that national security, even more than Chinese economic growth, is his top priority.

China would have much to lose if trade and capital flows decoupled quickly. But the US has just as much to lose, if not more, and is less prepared for the possibility.

Beijing is already actively implementing a “Fortress China” strategy to become self-sufficient in the most essential goods and technologies.

The US has said it wants the same. Yet one of the realities of America’s decentralised, privatised economy is that it is difficult to map risk. The Department of Defense may have a grasp on where all the parts of an F-35 fighter jet come from. But I doubt that policymakers understand the totality of the supply chain in even the most important non-defence areas, such as electric vehicles or electronic components.

This is not to say the US should copy Beijing’s top-down approach to economic development — as I’ve argued in past columns, decentralisation is a strength for the US in terms of innovation. But in a decoupling world, it’s not a good idea to raise the security stakes without having a solid plan for what happens if there’s a war, real or economic.

The US should appoint a White House-level resilience tsar (a non-partisan figure with a logistics or business continuity background) — as I’ve also argued previously — to pose the right questions and ensure public and private sector preparedness.

We need a far better understanding of the economic implications of decoupling, whether it happens slowly or suddenly. We must not sound the drums of war without understanding what they may bring.