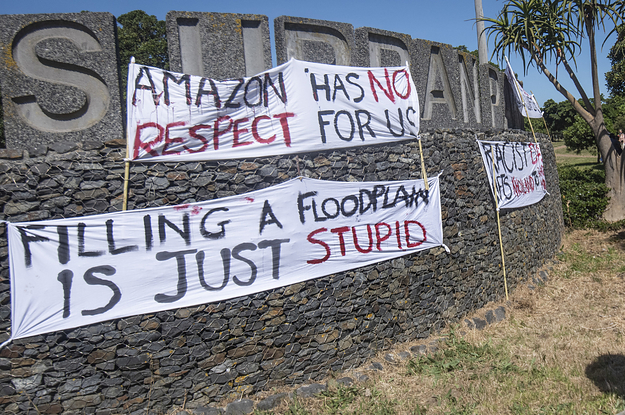 BULAWAYO, Zimbabwe — Amazon arrived in South Africa in 2004, grew its workforce in the country to 4,000 people, which then expanded to 7,000 in 2020, and then in February this year announced another round of job offerings.

To house a staff that has become one of the largest in southern Africa, Amazon started building a headquarters in Cape Town, a $270 million project intended to be the company’s business hub on the continent.

In March, a judge blocked the project after it encountered local resistance because the construction was set to break ground on land that is home to the Khoisan, a group of people whose traditions trace to precolonial times.

“We are aware Amazon intends to put millions of dollars into the project, but for us the real value of the land in question is the blood of our ancestors,” said Anthony Phillips Williams, coordinator of the Indigenous First Nation Advocacy South Africa, the Khoisan community organizers opposing the Amazon project. “We are ready to take the matter to the constitutional court.”

The ruling was the latest speed bump for US tech companies seeking to expand their footprint in emerging markets overseas — and a reflection of a growing skepticism toward the American behemoths across the African continent.

In recent months, Meta employees in Kenya have sued the company, alleging unsafe working conditions; Uber drivers in Nigeria, Kenya, and South Africa have gone on strike calling for stricter regulation of the ride-hail industry; and Amazon workers in South Africa have joined strikes demanding higher pay, which have taken place in 24 other countries.

American tech companies have grown exponentially in the African continent over the last two decades. Facebook saw a surge of users in Africa even as a growing share of people in the Global North have logged off the social media site; of the 330 million internet users across Africa, almost half have Facebook accounts. Uber has more than 12,000 active drivers across South Africa, working in around 40 cities that the company said accounted for 80% of the country’s urban population. Amazon has built data centers in South Africa, hired computer engineers and customer service operators, and in recent years began looking to construct a building to house its employees in the country.

The Cape Town headquarters project was the clearest mark of the company’s plans to further broaden its reach in southern Africa. But the land it selected turned out to be valued for both environmental reasons and historical significance.

The Liesbeek Action Campaign, the local group behind the campaign to block to project, described the location as “a lynch pin for the green corridor of Cape Town, sensitive indigenous plant and animal life, as well as a site of memory for the First Nation community and all of South Africa — associated with Khoi ritual and resistance since 1510.”

The land was the site of Khoisan battles against Portuguese invaders in the 16th century, one of the earliest known anti-colonial efforts of the global age. Activists say the plan to fill in the Liesbeek River as part of the development would threaten long-term harm to the surrounding ecosystem by reducing the amount of groundwater.

Amazon did not respond to a request for comment.

The Cape Town high court ordered Amazon to consult with the Khoi people before moving forward with the project.

“The fundamental right to culture and heritage of indigenous groups,” Judge Patricia Goliath wrote, “are under threat in the absence of proper consultation.”