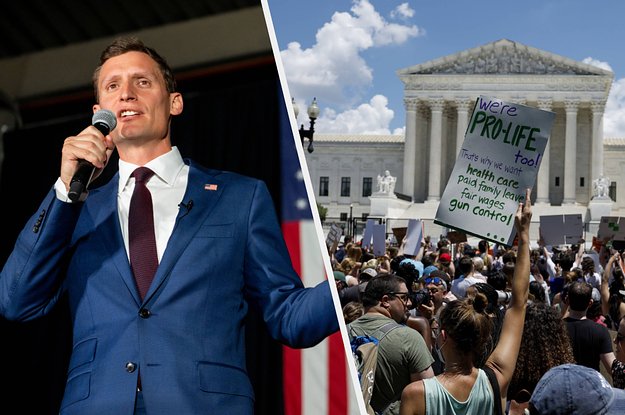 In the last few weeks, Michigan congressional candidate Tom Barrett revised the copy on his website, which previously said that “elected leaders have a responsibility to represent the values our faith teaches,” such as “protecting individual rights includes protecting the unborn.”

Barrett will “always work to protect life from conception,” it used to read, according to an archive of the website.

Now, the abortion section of his website focuses on attacking the stance of his opponent, Democrat Elissa Slotkin. The only mention of Barrett’s personal position states that he “has been a consistent pro-life state legislator.” On Twitter, Slotkin called out her opponent for scrubbing his website, saying that he is “hiding his 100% pro-life stance.”

Barrett’s campaign did not immediately respond to a request for comment from BuzzFeed News.

Other Republicans across the country have made similar moves. In North Carolina, congressional candidate Christian Castelli has changed his website since he was made the Republican nominee, as reported by Fox 8. His website no longer mentions abortion or anti–reproductive rights policies. In Colorado, congressional candidate Barbara Kirkmeyer deleted a statement that listed “defending the sanctity of life” as a priority. Scott Jensen, who’s running for governor in Minnesota, said in March that he would “try to ban abortions” if elected; then, last week, he posted a video saying that because of a previous state Supreme Court decision, the governor does not have the power to act on abortion rights. “It’s protected,” he said.

Christine Drazan, a Republican gubernatorial candidate in Oregon, removed her “issues” platform from her website, which had included anti-abortion statements, according to Axios. In Nevada, gubernatorial candidate Joe Lombardo said in a May primary debate that he would consider banning Plan B. Then, in August, he said he would not block contraceptives after all.

It is not unusual for politicians to pivot their messaging in the months after primary season to appeal to a wider range of voters, Republican strategist Robert Coon told BuzzFeed News. But this year, getting support from independent voters could have a new urgency.

“I think what we’re seeing this cycle is some erosion of support for Republican candidates among independent voters, and more specifically independent female voters, largely related to the Dobbs decision,” Coon said. “Depending on the state or district, even a nominal drop in support from independents can have a significant impact on a campaign’s ability to win.”

But that shift in rhetoric “simply won’t work,” according to Democratic strategist Stacy Pearson. Progressives, libertarians, and women with a variety of political views have come together against candidates with extreme anti-abortion views, more so than other issues.

“There’s no coming back from that.”