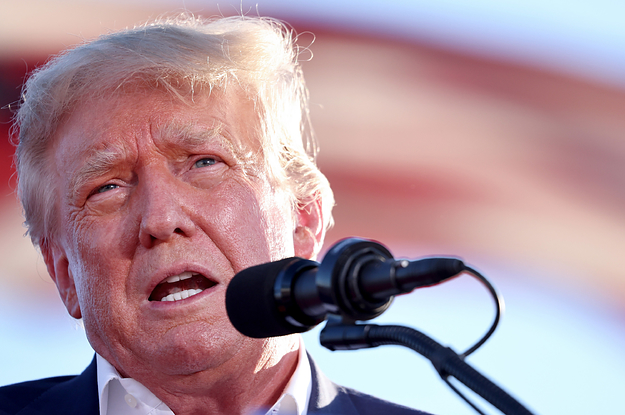 Former president Donald Trump signed and filed court documents that he knew contained false information as part of his scheme to overturn his loss in the 2020 presidential election, a federal judge wrote Wednesday.

The 18-page order from US District Judge David Carter from the Central District of California ordered conservative attorney John Eastman to turn over some emails he had written advising Trump and his presidential campaign to the House committee investigating the Jan. 6 insurrection at the Capitol.

“The emails show that President Trump knew that the specific numbers of voter fraud were wrong but continued to tout those numbers, both in court and to the public,” Carter wrote. “The Court finds that these emails are sufficiently related to and in furtherance of a conspiracy to defraud the United States.”

Carter was referring to figures Trump and his attorneys had put in a Dec. 4, 2020, court filing in Georgia in which they had alleged authorities in Fulton County had improperly counted the votes of 10,315 dead people, 2,560 felons, and 2,423 unregistered voters.

But when the Trump team turned to a federal court for relief in the matter, Eastman wrote in emails to the other attorneys that Trump had “concerns” about using specific figures.

“Although the President signed a verification for [the state court filing] back on Dec. 1, he has since been made aware that some of the allegations (and evidence proffered by the experts) has been inaccurate,” the judge quotes Eastman as writing in one email. “For him to sign a new verification with that knowledge (and incorporation by reference) would not be accurate.”

The judge ordered Eastman to hand over these emails to the congressional committee because he found that while Eastman and Trump enjoyed attorney-client privilege that would normally shield the documents, in this case, the so-called crime-fraud exception applied, meaning they are “sufficiently related to” and were made “in furtherance of a crime.”

In March, Carter said in another Eastman ruling that it was “more likely than not” that Trump had violated the law and “corruptly attempted to obstruct” Congress through his attempts to overturn his loss.

“Dr. Eastman and President Trump launched a campaign to overturn a democratic election, an action unprecedented in American history,” Carter wrote in one searing passage of that March ruling. “Their campaign was not confined to the ivory tower — it was a coup in search of a legal theory. The plan spurred violent attacks on the seat of our nation’s government, led to the deaths of several law enforcement officers, and deepened public distrust in our political process.”

In Wednesday’s motion, Carter said four other emails between Eastman and other attorneys showed they were primarily concerned with filing cases in courts in order to delay the Jan. 6, 2021, certification of the election results — not to seek actual judicial remedies.

“Merely having this case pending in the Supreme Court, not ruled on, might be enough to delay consideration of Georgia,” Carter quotes the attorneys as writing.

Carter ordered these emails be turned over to the Jan. 6 committee as well, citing the crime-fraud exception.

“This email, read in context with other documents in this review, make clear that President Trump filed certain lawsuits not to obtain legal relief, but to disrupt or delay the January 6 congressional proceedings through the courts,” Carter wrote. “The Court finds that these four documents are sufficiently related to and in furtherance of the obstruction crime.”

Last week, the Jan. 6 committee voted unanimously to subpoena Trump for testimony, although he is not expected to comply.

Trump has not yet been charged with any state or federal crimes in connection with his attempts to overturn the election — a decision that will ultimately be made by prosecutors, not any judge or congressional committee.

Neither attorneys for Eastman, nor representatives for Trump, immediately responded to a request for comment.